As best I can tell, this week that just finished was probably a pretty good indication of what a normal week will look like. Well, normal aside from Thursday, which was Armenian Independence Day. And looking back, it was a really good week, even with the occasional hiccup.

But first, the excursion!

We spent all day Saturday visiting two monasteries, (Hovhannavank and Saghmosavank), the Armenian Alphabet Monument, the Gourmet Dourme handmade chocolate factory, and the Byurakan Observatory. If you compare that list to the one I posted last week, you may notice that this one has a couple of additional locations. It was a long, busy day, and I was exhausted by the end of it, but it was so much fun.

The monasteries were incredible and beautiful. The biggest parts of both were built in the 13th century, but the original basilica, was built in the early 4th century. Seventeen hundred years ago. Seventeen. Hundred. I got to stand and pray in the same place that Christians have been worshiping for the better part of two thousand years. And I’d keep going, but I don’t think words are going to do it justice, at least not in a blog post like this. Hopefully, I’ll fill in at least a few of the gaps with pictures. 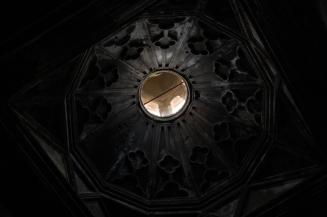 View from inside Hovhannavank narthex 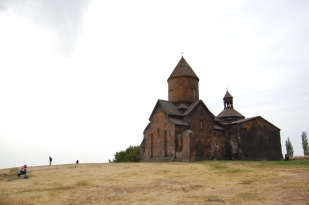 Exterior of the original basilica at Hovhannavank

There is one thing, though, that pictures aren’t going to help me share, and that’s what it was like to listen to the Little Singers of Armenia in both of the churches. The Little Singers, as you’ve probably guessed from their name, is an Armenian youth choir. They are incredibly beautiful singers who have sung all over the world, and getting to listen to them sing in the acoustics of both churches was extraordinary.

Between visiting the two monasteries, we stopped for a little while at the Armenian Alphabet monument. It consists of giant stone renditions of each of the letters in the Armenian alphabet, and was installed in 2005 to honor the 1600th anniversary of Mesrop Mashtots creation of the Armenian alphabet. It’s weirdly cool. Also, there was ice cream and I got to see a horse, and it’s hard to complain about that, either. 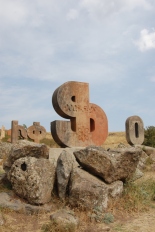 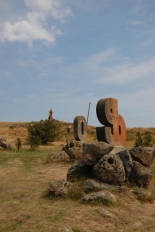 After that, it was the chocolate factory! I have a feeling that terminology is giving the wrong impression– I know I wasn’t quite sure of what to expect. It’s called Gourmet Dourme, dourme being the Armenian word for chocolate, and it’s actually pretty small; they make handmade, handwrapped gourmet chocolates using Belgian chocolate, and it’s not a huge industrial operation at all. It’s owned by two Armenian brothers who repatriated from France and Austria. We got samples, and it was just as amazing as you would expect it to be. Maybe moreso. It’s also really cool that this is one of the new things coming out of Armenia.

Our final stop was at the Byurakan Observatory. I believe the original plan was to visit the HAYP Pop Up Gallery that was setting up there, but we also had the option to tour the telescope, which several of us did instead. Unfortunately for those of us who still only have a basic grasp of Armenian, the tour was mostly conducted in Armenian, so I didn’t learn as much as I would have liked to, but we still got to see it and learn just a little bit about astronomy in this part of the world.

The telescope itself is about ten to fifteen minutes away on foot from the main entrance, and for those of you who played Myst, it felt a little bit like that, minus the bit about traveling through books. There was also a friendly dog who who followed us over and was just a generally amicable fellow. As for the more technical aspects, about all I remember/heard was that it is a 2.3 meter Cassegrain reflector, and while it’s not among the very largest anymore, it’s not tiny, either. 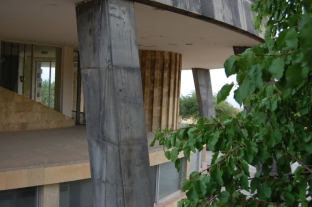 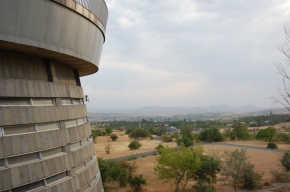 So, that was Saturday!

Monday marked the first day I went to the hospital to shadow, as well as the first day I had to get up there on my own. I went by marshrutka, and was very grateful that my first time taking one was on a day a bit less busy than normal. The marshrutkas are basically fifteen passenger vans, but on busy/normal days (like this past Tuesday), they are definitely standing room only.

Sadly, my stomach decided to go squirrelly after only an hour or so on Monday, so I actually ended up going home early and sleeping. Tuesday went much better, and I got to spend the whole day shadowing a very kind doctor who would translate for me when she was done with each patient so that I could follow what she was doing. I’m hoping that my Armenian continues to improve so that I can follow more on my own.

That’s all for this week! As always, thanks so much for reading about my adventures. To those of you who are also interested in seeing more fiction from me, I’m hoping to have the story I’ve been coaxing out word by word finished sometime next week, and I have another one that I’m hoping will be a bit easier to write coming shortly after that.