Oh, man. Where to start. Our Artsakh trip was four days long, and I could almost dedicate an entire post to each one. However, in the interest of documenting my adventure in a timely manner (read: sometime this month), I’m going to try to fit it all in here. As always, let me know if there’s anything you’d like to hear about in more detail; I’ll be more than happy to oblige!

Before I start into what we actually did, I want to mention that Artsakh is one of the most stunning places I’ve ever been– and yes, that’s including Santa Barbara, Ireland, and northern Idaho. According to one etymology, the name Artsakh means “Aran’s woods”, with Aran being an ancient Armenian king. The other name commonly used to refer to the region is Nagorno-Karabakh, which translates as “mountainous black garden” from a mixture of Russian, Turkish, and Persian. Either one is accurate, though words alone hardly do justice to its fierce beauty. Hopefully pictures will help where descriptions fail. 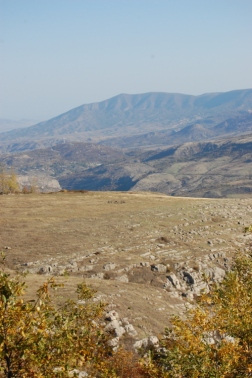 We left Yerevan at eight o’clock on Friday morning, starting our adventure by driving southwest to the Ararat Plain where we ate a breakfast of bread, coleslaw, and lakhmajun in a field with an incredible view of Greater and Lesser Ararat. Despite the vague fog that hung between us, the mountains were awe-inspiring.

From there, we drove on eastward through southern Armenia. I stared out the window the entire time, watching as the landscape grew ever more mountainous and the director of our program shared a thousand different facts and bits of knowledge about the places we passed. We made a short stop at the Arpi Market to buy snacks and use the restrooms, and I took the opportunity to take pictures of the rocky hills and the beautiful Arpa River. 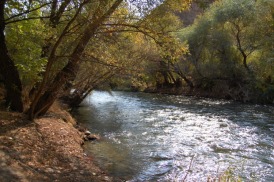 The hills behind the Arpa.

Autumn colors in the hills behind the Arpa.

Down the road we had yet to travel.

Back up the road we came from.

The craggy hills above the market. 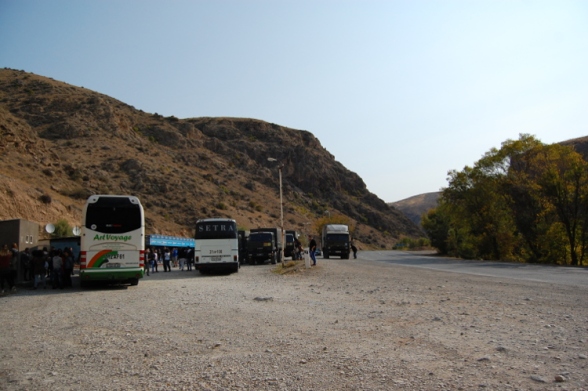 Our next stop was at the Wings of Tatev, the world’s longest non-stop double track cable car, which we took up to the monastery and village of Tatev. We ate a simple lunch of salami, cheese, cucumber, and tomato wrapped in lavash (Armenian flatbread), which we got to enjoy in the refectory between exploring the grounds. Much of the monastery itself is currently being rebuilt after suffering severe damage during an earthquake in 1931. While much of it is still variously damaged, Saints Paul and Peter Church has been reconstructed and our group was able to go inside and receive a blessing from the bishop before we crossed over into Artsakh.

View of mountain roads below the tramway.

Khachkar in front of Tatev. 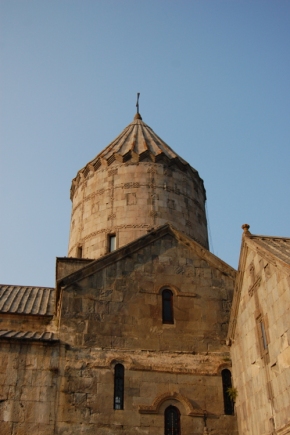 Village in the mountains around Tatev.

It was well after dark by the time we finally reached Shushi. Group by group, the Birthright staff separated us by which Artsakhsi family we would be staying with, and our generous hosts received us and fed us and made sure we had everything we needed before sending us off to bed. Armenian hospitality is deeply warm and giving; I hadn’t thought it possible, but it was even more so in Artsakh.

Our second day started with breakfast at our homestays: tea, bread, cheese, preserves, potatoes. Perfect fuel for exploration. Both of the other volunteers who stayed at the same house spoke Armenian, so we were able to talk with our host mom and share a little back and forth. I think my only regret from the trip was that our schedule was so packed that we had little chance to get to know her and her family more. 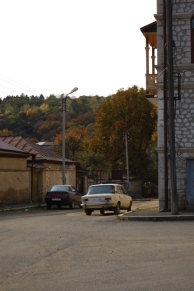 View from the corner where we waited for our bus. 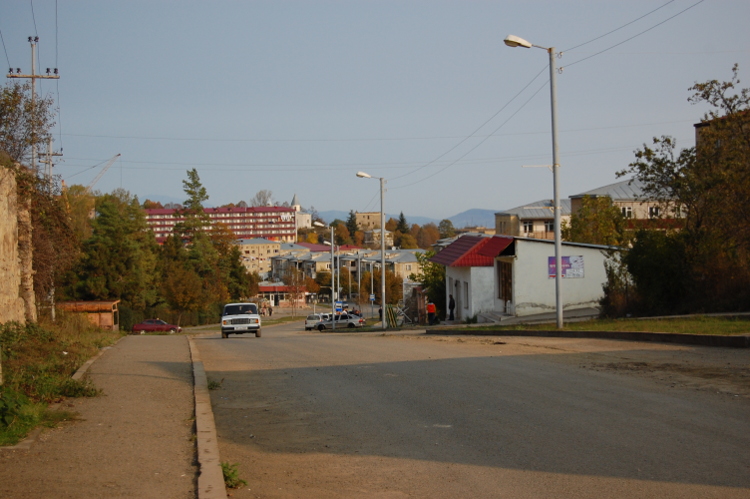 Another view from our corner.

After that, we gathered at the Shushi Music Academy where we learned more about the conflict between Artsakh and Azerbaijan– a huge topic that I will not be able to do any sort of justice in this post. Please, if you’d like to hear about it, let me know and I’ll do my best to share what I’ve learned. We also got to hear about the work that the Music Academy is doing. The institution is a full academic school, though as the name implies it also focuses on music. In addition to teaching the students, they also provide instruments and two meals a day.

From there we made a short stop at the Tatik-Papik Monument just north of Stepanakert before continuing on to an army base outside the city. For obvious reasons, I have no pictures of the latter, but the experience was incredibly interesting. We had the opportunity to see two different types of tanks, shared lunch with the soldiers, and ran a part of the obstacle course they use for training.

Tatik and Papik (Grandma and Grandpa)

Tatik and Papik (Grandma and Grandpa) 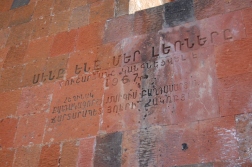 Afterwards, we returned to Stepanakert and took part in a “winemob”, which is what it’s called when the ninety of us get divided up into groups of five and each group is given a bottle of wine and told to get ourselves invited into one of the surrounding apartments in order to get to know some of the people who lived there. The staff made sure that each group had at least one person who spoke fluent Armenian, sent us all towards specific buildings, and gave us a time to be back at the buses, but beyond that, left us to our own devices.

It’s not the sort of thing I can imagine doing anywhere else. If I’m honest, I had a hard enough time imagining it in Stepanakert. But I’m afraid I might be giving the wrong impression. Despite my introverted misgivings, this was one of the most wonderful experiences I’ve ever had.

My group didn’t even get a chance to knock on a door before we were invited inside. As we reached the building we were assigned and tried to figure out where we were supposed to enter, a man carrying groceries came up and asked us what we were doing. As soon as we explained, he invited us to follow him to his home where he introduced us to his wife and his little son, and we spent the next hour and a half sharing stories and kindling our new friendship over wine, fresh fruit, and homemade vodka.

Our last stop of the day was the Gandzasar monastery, which we unfortunately did not reach until after dark, and therefore were not able to see the incredible view of the surrounding area, which we were told is particularly beautiful. The church itself is lovely, of course, and is surrounded by high walls, one of which still bears damage from Azeri artillery, and we could also see bullet holes in the main building, though I understand that it never fell during the Liberation War. We ate another simple, tasty meal of meat, cheese, and vegetables wrapped in lavash and finally returned to our homestays a little after midnight.

We had breakfast with our host families again, then headed back out to the buses for the ride out to the Azokh Cave. Or rather, to a trail head nearby which we used to reach the caves themselves. The hike wasn’t particularly long, but our surroundings were incredibly beautiful, and I spent the entire trek stopping every thirty seconds to take more pictures. I regret nothing.

The Azokh Cave is actually a group of six interconnected caves that have proven to be a site of rich archaeological discovery as well as a pristine ecosystem in its own right. We were able to go inside, and one of our staff members who had worked with the team doing the excavation told us about the process and some of the things they had found. We also spent a little while with our lights turned out, standing in the deep dark and listening to the fluttering of bats overhead. 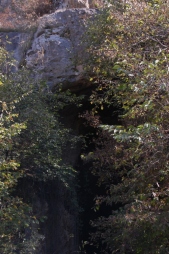 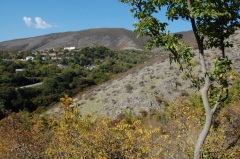 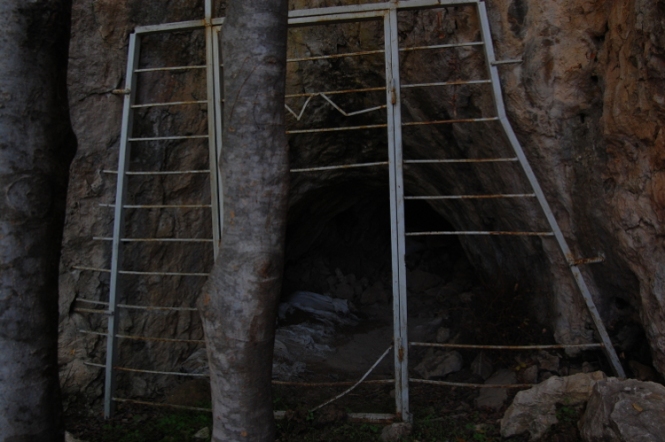 Afterwards, we hiked back down to the trail head, where a couple of trucks picked us all up to take us to the nearby village of Azokh for lunch. There’s a hiking trail that runs through Artsakh and passes by Azokh, and one of the village families has opened their doors to those going through. They also welcomed ninety hungry Birthrighters and fed us with bread, cheese, meat, incredible salads, tasty gata, and more.

From there we returned to Stepanakert, where we had a little free time to explore the city. It’s not a large city, and though even the last ten years have seen much progress in the rebuilding process, there are still many, many buildings that are either abandoned or still bear damage from the war. It’s a striking dichotomy, a strange mixture of hope and pain.

Our final stop for the day was the kef or feast at the home of a longtime friend of Birthright Armenia. The whole evening was filled with food, drink, and countless toasts as we expressed our friendship and our thanks for each other, our staff, and our incredible host. The kef is something that every Birthright group that comes to Artsakh has taken part in for the last ten years, and though many of us there that night had never been there before, our host welcomed us as family.

Despite the late night after the kef, some of us dragged ourselves out of bed early the next morning for a hike to Jdrduz in the mountains above Shushi. The views from the hike to the caves the day before were wonderful. The views here were awe-inspiring. We found beautiful views of both Shushi and Stepanakert. We saw canyons and a village open up below us, the remains of an ancient hill fort built impossibly into the cliffs, the metal ropes strung across the gorges to keep enemy aircraft from sneaking in under the radar. I don’t remember quite how long we spent up there, soaking in the beauty and the history of the place. I just know that I could have spent much longer there.

Abandoned home on the way up to Jdrduz. 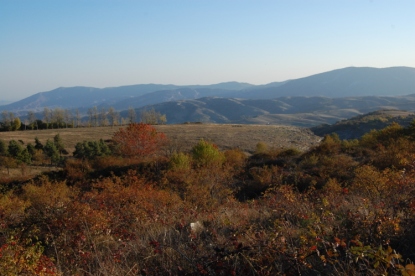 Our last hours in Shushi were spent packing, eating a final breakfast at our homestays, and taking a quick walking tour of Shushi. We visited the ruins of one of the city’s old mosques and saw some of the work being done to restore it. We passed through some of the ancient, narrow streets and saw the old buildings there. We spent time in the Ghazanchetsots Cathedral.

And finally, we had to leave.

I’m not sure what I expected to find in Artsakh. I had heard that it was an incredibly beautiful place, and that is certainly true. It’s so much more than that, though. It’s a place filled with people fighting to make a life for themselves, a place filled with history, a place that can simultaneously give you hope and leave you wondering how a thousand and one obstacles can ever be overcome. It’s a place I’ll never be able to do justice in a single blog post. I’m not sure I’ll ever be able to do it justice with words at all.