As happens at this time of year, the days grow shorter and darker and the nights grow longer and I remember once again that this is my favorite time of year. Those who know me know that I can, at times, be a bit of a homebody– and these cooler, quieter days are made for staying at home with friends and family, for drinking tea and hot cider, for sitting in front of a crackling fire and maybe talking or maybe not as the mood takes us. The fireplace is a little harder to come by down in California, of course, but we find ways to make do. And I think that’s why I love it when the sun sets early. It makes it easier to just sit, to just relax together.

While last week’s adventures can best be described as big and grand, my favorite parts of the past few days have definitely been of the smaller sort. Which is not to say that the experiences are going to stick with me any less. In fact, it’s often these incidental experiences that work themselves most deeply into my memories.

That being said, calling a khash party “small” is probably a bit misleading. Khash (խաշ) is a dish made by boiling sheep or cow’s feet to make a broth, which is then seasoned with garlic and salt to taste and given substance by crumbling dried lavash into it. It is traditionally eaten in the morning, and, in Armenia at least, only during months that have an “r” in the name. Vodka is often served as well, and you probably won’t feel like eating much else for the rest of the day.

I got to enjoy the meal with a large group from Impact Hub Yerevan, the amazing coworking space where the Repat Armenia office is located. Or rather, I did once I double-checked the address and realized that I’d ended up at the wrong branch of the restaurant. It all worked out in the end–hunger and the nagging knowledge that you’re already late do wonders to keep you walking quickly–and the rest of the morning was spent enjoying each other’s company over tasty food.

That, I think, is one of my favorite things about being here. We love food and we love friends, and we make sure to eat food with friends every chance we get. And by “friends” we mean everyone from brand new acquaintances to lifelong companions. All those old stories: Beowulf. The Iliad. The Odyssey. Hospitality was deeply ingrained in those cultures as well, and there was an assumption that guests would be treated a certain way. After spending two months in Armenia, I think I understand it a bit better.

Another highlight of the week happened while I was shadowing at the hospital. It wasn’t medical in nature, and I’m still missing the chance to be more involved in that field, but that’s another topic for another day. What my time shadowing at Nork Marash has given me every day I’m there is an incredible immersion in the language, and earlier this week I got the chance to see how far I’ve come.

A family who had come in several times before came in again. At one point, the doctor stepped out of the room and I stayed behind. Since they had met me before, several of the family members knew that I was an American, and I heard them mention that fact to each other, which I took as an opportunity to mention that I did speak a little Armenian.

It was so much fun to talk with them. As soon as they knew I could understand, they asked me questions about where I was from and why I was in Armenia, and though I didn’t always know the exact word I wanted to use, we definitely got by. It was such a simple conversation, but the reminder that I’ve learned enough Armenian to make basic connections with strangers here has left me a little giddy all week.

Other than that, it’s been a fairly low-key week. A couple members of my language class are finishing up their time here, so we all went out to dinner together to celebrate (and practice our Armenian). It’s rained once or twice, and most of the trees are boasting beautiful yellow leaves. I’m about a week past halfway through my trip now, and while I miss everyone back home terribly, I feel a similar tug every time I think about leaving. I suppose the only thing to do is to savor every minute of the time I have left. 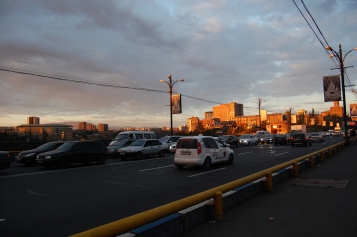